This open letter to the new Commission President is *co-signed by five MEPs and former MEPs, and ten policy and media experts, all in a personal capacity. They have experience of working on press freedom, fighting disinformation, copyright, and public regulation.

Your July nomination speech highlighted two related top priorities: Democracy, and Making Europe fit for the digital age, in the broader context of Europe’s sovereignty. To uphold European values requires a sustainable, pluralistic and trustworthy media ecosystem. Democracy is fading and the European project is endangered by the lack of a real strategy for the media sector, so far.

Democracy and media crises are clear enough: we should now focus on remedies – and their efficient implementation. All actors need an adjusted regulatory framework (alongside existing competition rules), building on prior processes.

We note your requested Digital Services Act. Several further strategies should be coordinated with it. This includes Věra Jourová’s Democracy Action Plan, and a European strategy for the media sector, already called for by MEPs and stakeholders, now announced in Thierry Breton’s answers to the Parliament: ‘ […] will present  an action  plan on the competitiveness and […] pluralism of the audio-visual sector and the media’.

Building on your Commission’s commitment to industrial policy, we suggest to have not just a Digital Services Act and legislative initiatives, but one horizontal ‘digital umbrella vision’, plus several vertical ‘sector strategies’, concerning media, AI (artificial intelligence), e-commerce, industry, etc.

Any sector’s strategy may include a ‘smart policy mix’, notably: (co)-regulation – including interpretation of competition rules and legislative initiatives – education (of professionals and users), support to Innovation or R&D or industrial projects.

Before suggesting actions, let us leave aside the usual justifications for laissez-faire.

This includes scarecrows (‘Ministry of the truth’, or extreme versions of ‘internet freedom’ and ‘level-playing field’ allegedly overriding other principles). And also good ideas that are not realistic (‘breaking up the giant platforms’).  We are in Europe, not America.

Regarding the fight against ‘fake news’, monthly reports underline known weaknesses of the platforms’ Code of practice. The subsequent Action Plan addressed Russian interference but still did not handle the economic side of the information ecosystem.

The initial EU High-Level Expert Group on disinformation, initiated by Mariya Gabriel, did look at the whole picture: it gathered experts from all press, broadcasting, academia and indeed platforms. Its report recommended not just self-regulation, but co–regulation: setting standards below which public regulation would kick-in.

This was the key compromise sentence: ‘As a second step, the Commission is invited to re-examine the matter in Spring 2019 and decide […] whether further actions should be considered for the next European Commission term. This may cover options for additional fact-finding and/or policy initiatives, using any relevant instrument, including competition instruments […].

We are a few months late: now is the time to act. Not just regarding disinformation: co-regulation is relevant for many aspects of platforms’ position and behaviour.

The chief issue is: how to make sure that good content crowds out the bad? In other words: how to dilute fake news and ‘click bait’, via greater visibility for genuine users and quality content? This is possible, given today’s algorithms, if well ‘fed’ with the right ‘signals’. Item-by-item evaluation by fact-checkers is relevant but too slow.

One should assess sources, not negatively by censoring any, but positively: highlighting the most credible ones. Algorithms are good at generating loads of relevant advertising, they can also promote relevant content quality.

Trust indicators are not a blunt black or white certification, but rather ‘50 shades of credibility’. Combined with respect for the copyright directive, this could indirectly boost the viewership and revenue of quality media.

Trust Indicators are not new: they feature (in different ways) both in the work of the Expert Group on disinformation, and in the Code of Practice. However, they are not really in place, in the sense of independent, outside input into platforms’ algorithms.

Should platforms do all this: ‘negotiate’ content access, decide on visibility, steer user data, set advertising conditions? and then also assess content credibility? Of course not alone, and not just by picking themselves some subcontractors.

Some stakeholders even envision an open market for Trust Indicators. Users would be able to replace the default Indicator with their own choices. This would go with greater control over one’s data, including portability at users’ choice, for example from platforms to one’s favourite media. For Mrs Vestager, access to data is key for competition from smaller players.

Systemic platforms for democracy, like banks for the economy 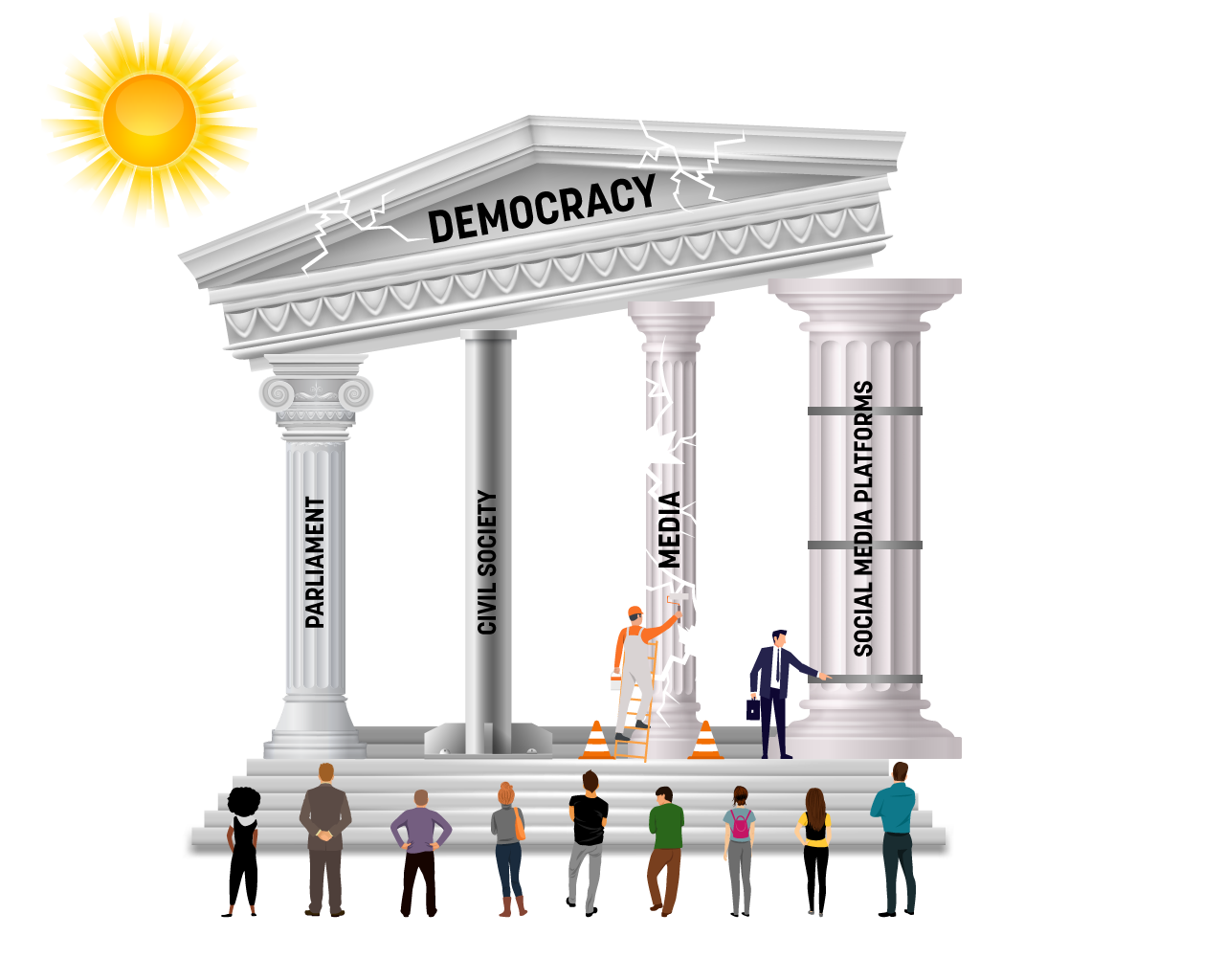 To avoid unnecessary red tape for all, the focus should be narrow. ‘Systemic Publishing Platforms’ (nickname SysPPees) is a new wording, building on previous concepts. Dominant in a number of markets, platforms are an ‘essential facility’, a ‘must’ gatekeeper for other actors and for users. This labelling can create obligations under competition case law, and speed-up adaptation of national laws and/or EU regulations.

While media, telecoms operators and platforms disagree on many points, all would agree that SysPPees are neither journalist-driven nor mere ‘pipes’. What we need is a ‘third category’, between infrastructure and professional journalism.

Why use the word ‘platform’? It is the one they choose, after initially calling themselves social media. They are neither telecoms infrastructure (content regulated lightly), nor a journalistic media (heavily regulated broadcasting and semi-self-regulated press). After many controversies, that lack of liability for platforms is over.

Why ‘publishing’? Inviting, hosting, selecting and promoting content is the essence of many platform services. Whatever the content (from article to messages and data), whatever the tools (journalists’ or artificial intelligence), it is still publishing. Massive publishing requires IT, and this is not a reason to lower the standards, quite the contrary.

Why ‘systemic’? One should be technology-neutral, not size- and power-neutral. Executive Vice-President Vestager talks about the ‘biopower’ of platforms, implying that it should be supervised and regulated. SysPPees are critical to democracy, like media too – the fourth estate – and like banks for the economy. Unlike some systemic banks ten years ago, platforms don’t need a bailout, far from it…

Building on competition concepts for digital regulation makes sense: this is the spirit of the recent Regulation on Platform-to-business trading practices. This should be expanded to cover all SysPPees’ services and will help the media recover some of its lifeblood: advertising revenue.

Defining the platforms better will both facilitate using existing rules, and allow differentiated legislation. Data privacy rules were initially aimed chiefly at platforms. They are legitimate, but so onerous for SMEs and NGOs that many recourse to…SysPPees and other services to manage users’ data. Should a local association be subject to the same rules as Facebook? Of course not.

Given the deep links between their entities (ownership, commercial, technical and data), two giants should be handled first, as groups: Alphabet (Google), and Facebook. Based on the same objective criteria updated dynamically,  Apple, Microsoft, Amazon, and few others could be addressed later.

President von der Leyen, you have set a 100-day deadline for several legislative initiatives, and wish to foster efficiency. This cannot work within the usual silo thinking, or would lead to poor drafts sent to Council and Parliament, and inconclusive debates. The six groups of Commissioners that you just set-up correspond to your six broad, horizontal priorities. In addition, you need a few cross-cabinets and cross-DGs coordination, answering some acknowledged sector needs.

We established above that the media sector is at the crossroads between ‘Digital’ and ‘Democracy’: relevant Commissioners and DGs will need some working group across this boundary.   In this area, beyond your agreed six priorities, you may need the right coordination between Commissioners , plus a task force between directors of the related services. Member States often have such a sector organisation, so that this approach will also facilitate cooperation with them.

The momentum for democracy in the digital world will increase with a strategy for Europe’s media sector. A few concepts will help across initiatives, like SysPPees and Trust Indicators. Both users’ choice, citizens, and democracy in Europe will benefit.