Dear reader,
Innovation. This is the word we would like you to include in your New Year’s Resolutions. Stars4Media, our flagship project for 2020, will offer plenty of opportunities to put it into action, starting now. If you know a young media professional, he/she can already express their interest, or submit an application. 2020 will be a year of action, learning, exchange and innovation! If you are not sure yet, have a look at the project page to know more.

On the ‘Think’ side, the stage is finally set: the new European Commission is in place, new policies will finally be developed and implemented. In this edition, you will find, as usual, some relevant insights on news that will shape the upcoming debates in the Media sector. In particular, the latest Open Letter calling for action around the democracy infrastructure, including platform regulation.

As usual, we are eager to hear your thoughts and reaction!
We wish you all a wonderful winter holiday and a happy new year!

DO – Exchange and training programme on media innovation 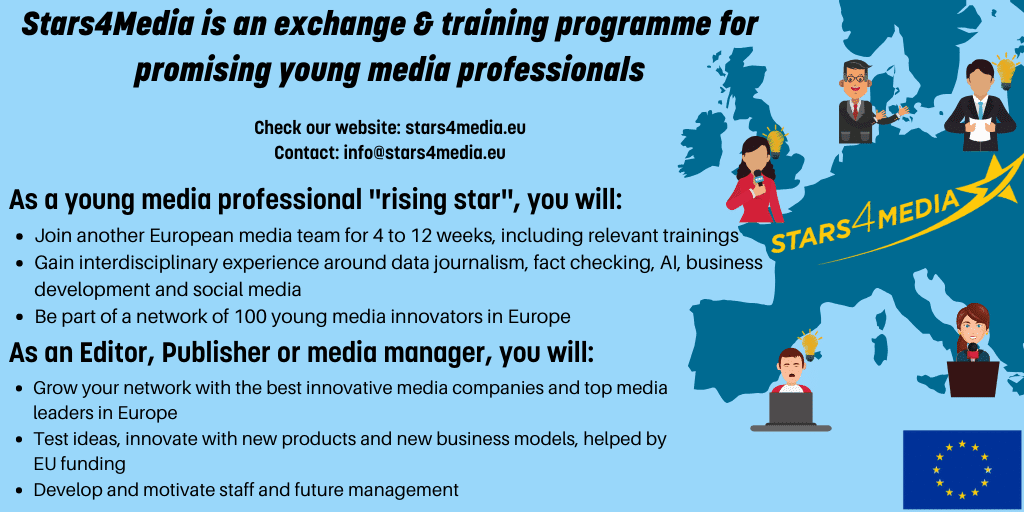 What skills will journalism need in 2020? (via Journalism.co) “For journalists, editors, designers, developers, and all of the parts of the newsroom that collaborate together to bring great journalism to audiences, that means that the obsession with delivering stories via mobile needs to deepen even further,” said Blathnaid Healy, CNN Digital International.

December 3 – Shaping future media policy
Europe’s media publishers called on new Commission to deliver a comprehensive media strategy and interacted, notably, with VP Jourová. The Digital Services Act and other initiatives should ensure media continues to play its vital role for society. Online platforms are made more responsible, notably to improve the fight against illegal content, hate speech and disinformation.

Report: Falling behind: How Social Media Companies are Failing to Combat Inauthentic Behaviour Online
Researchers at NATO’s Strategic Communications Centre of Excellence highlighted that “Facebook, Instagram, Twitter, and YouTube are still failing to adequately counter inauthentic behaviour on their platforms”.

Mark Zuckerberg Says There Was Nothing Shady About Secret Trump Meeting (via Vanity Fair) – The Facebook founder is defending his political ad policy—and his (possibly related) dinner with the president. “We talked about a number of things that were on his mind, and some of the topics that you read about in the news around our work,” Zuckerberg said, dismissing the notion that Trump lobbied him on any matters.

How to take back control from the Big Tech barons (Financial Times): “Facebook can tweak its algorithms in ways that can make us feel, and potentially even act, differently.”

TikTok brings lobbying fight to Europe (via Politico)
TikTok is one of the fastest growing worldwide, outpacing U.S. competitors Facebook, Instagram, YouTube, and Snapchat. The video-sharing app is eager to get itself a seat at the policymaking table. “TikTok recognizes that Brussels is an exporter of regulation”.

Media freedom is under attack. And not only in authoritarian states such as Azerbaijan, and countries in transition like Northern Macedonia, but also in countries with strong democratic constitutions like Germany, and long democratic traditions like the United Kingdom. The European Centre for Press and Media Freedom (ECPMF) was founded by 25 organisations from all over Europe in order to stop these attacks, and implement the European Charter on Freedom of the Press in the EU, signed by 48 editors-in-chief and leading journalists. Join the ECPMF and can sign up here to become a member.

December 5-6 – Club of Venice Plenary Meeting (the network of communications directors from EU Member States).
C. Leclercq addressed this event with a presentation on “Europe’s future media landscape: the EU’s and Member states’ engagement in reshaping the ecosystem”. He recommended foster dialogue between governments’ departments, media and platforms on policies regarding communication, disinformation, platform regulation and media.

December 11 – The Code of Practice on disinformation: social media and platforms accountability. During this CONNECT University session, high-level speakers discussed how successful was the implementation of the Code of Practice. The lecture explored the reasons of elaborating a self-regulatory Code and the issues of political ads transparency, scrutiny of ad placements, integrity of services, content ranking algorithms, and access to data.

January 21/22 – European Forum “Media Councils in the Digital Age” – Brussels. For its 10th anniversary the Council for Ethical Journalisms organises a Forum dedicated to the challenges of journalistic self-regulation in the digital age.